Here we are back in Central New York State, going from 90+ degree days in the desert valley to our current snowy Sunday in the hills of NY. Typical Upstate NY weather… on Wednesday it is supposed to be near 80.

We had an interesting ride back across the country. Our route took us through New Mexico, Texas, Oklahoma, Missouri, Illinois, Indiana, Ohio, Pennsylvania and then across Western NY State.  Our only “stop” was in Ohio at the FMCA Campground outside of Cincinnati to see Jennifer and Trevor and to recharge our constitutions. Our goal was to get to Tall Pines prior to May 1 but when we read on Facebook about one of the sets of workampers going to the hospital and requiring being admitted, we decided to accelerate our timetable and leave our other planned stop in Orchard Park (for the Bills Draft Party) early to help our new employers out.

Most of the trip was uneventful. However, some events stuck out as “highlights.”

First, in New Mexico on the 16th (the day after departing Valle Del Oro) our inverter gave us an error (E05/OL) which indicated an overload condition. This happened as we switched off the generator from our morning run to make coffee, etc. We tried to clear it but that didn’t work, so we decided to go on and check it out later. We drove on to Oklahoma (through the gentle yet windy northern panhandle of Texas) and stopped for the night and checked the inverter again. Same error. We called Xantrex and they gave us instructions on how to reset the inverter which we tried with no success. So we ran the generator some more and then kept the fridge locked up tight (as that is the only real concern) at night. The next day, we drove on to Missouri and tried again… no luck. We decided to just keep running the genny for an hour or so every few hours during the day to keep the fridge cool and wait until we were plugged back into shore power in Cincy. Upon arrival in Cincy, we tried everything again but still get the error. Apparently, our inverter has a bad automatic transfer switch and needs to be replaced. So that is a $400 project to look forward to.

Oklahoma was having some wildfires which were visible from I-40 with lots of signs saying not to drive through the smoke. Kind of exciting but not real scary as the fires weren’t really that close and the highway crews were out doing preventive burns in the median and along the sides of the highway.

Missouri was uneventful until we got outside of St. Louis – there was an accident on I-44 that blocked all but one lane, and then road construction that shifted lanes and the makeshift roadway was both canted and uneven with potholes. At one point, as we approached the merge with I-55 to cross the Mississippi, the road sloped away sharply to the left, with a construction truck entrance on the right and the slope then rapidly shifted to the right. The speed limit here was 55 but we were doing about 45 and braked once I saw the truck approaching the truck entrance and realized it was going to come out right next to us as we were rolling around in the slanted roadway. We ended up bouncing and swaying back and forth, nearly getting hit by the construction truck and many bad words were said. Fortunately, everything was fine but we were sure that we had broken something somewhere and the twist of the body seemed to pull the dashboard apart right in front of us. Once we stopped and got a chance to look, the only things needing any help were the door – the top hinge was completely detached and the other two needed some drilling and extra screws to put back into place. We checked the dash and everything was still good (amazingly!) and other than our heart rates, there were no casualties.

Cincinnati was great except that FMCA was getting ready to have a board meeting so they had reserved the campground and we had to leave a few days earlier than expected. This turned out to be a blessing as we would eventually head to Tall Pines earlier than expected anyway. So we left on that Sunday to go to Orchard Park and to attend the Draft Party scheduled later in the week. 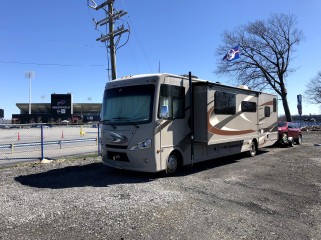 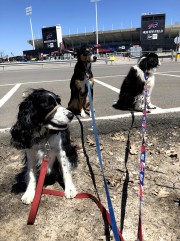 On Monday, we arrived in Orchard Park and then later that night read the post on Facebook about the other workamping couple who wasn’t able to get to Tall Pines due to a medical emergency. As we got up in the morning, we decided it would be best to get to Tall Pines and join the workforce as quickly as we could so they could open on time.

We arrived at Tall Pines on Tuesday afternoon after a few exchanges of email with the owners. We got settled in and met some of the other workampers and got off to a pretty good start. It is a very family friendly place and everyone is very friendly and it has been fun getting to know each other. Of course, it is a much smaller campground than VDO, so it has a cozier and rustic feel to it.

The weather on Tuesday was nice (around 70 and sunny) but it was predicted to get colder and wetter for the weekend. We worked our first few days on Friday, Saturday and Sunday helping to clean up each campsite and prepare the bathrooms and the store. Of course, today (Sunday) it was snowing at the end of April in Central New York… not crazy. Some things never change. And the inverter is still broken. But it is still home, sweet home.

Epilogue… I guess being born and raised here has a lot to do with our feelings about being here. There is just something magical about the hills and valleys, the lakes and rivers, the small towns and the hamlets that make up this part of the state and it is unique in the country. I guess it brings back some childhood memories as well as simply helps us to feel comfortable. And in that way, it is REALLY home.

View all posts by traversity